History of the Silver Box

The word box is derived from the Latin ‘buxis’, pertaining to a receptacle or container made of wood, cardboard or metal, usually rectangular in shape and fitted with some form of a lid or cover.

Boxes may be designed with specific functions, a few of them with antique interest are listed below:

Snuff is any powder prepared for sniffing – the main use of the term being for powdered tobacco.

Snuff-taking was first documented in the late 1400s but had very mixed reception. Snuff was introduced to Britain from France in the early 1600s. It became established in England during the reign of Charles II (1630 -1685) when it became acceptable for even ladies to take it. As with many things made popular before the advancement of modern medicine, it was believed and hoped that snuff would cure all manner of ailments. By the 1700s, snuff was the approved tobacco product favoured by the nobility

Throughout European and colonial history in the 18th and 19th centuries the snuff box was a major, often bespoke, indispensable personal possession made in a variety of materials from gold and silver to tortoiseshell or horn. Snuff boxes were usually small enough to fit into a pocket in a person’s clothes. Small but sturdy, snuff boxes can still be found in excellent condition today, making them a valuable collectable.

The snuff mull - a specific type of snuff box - is a Scottish example that is particularly fashioned of horn with a metal lid.

The main feature of a snuff box/mull is that it must be airtight with a flat lid – if the lid bulges, it means the item contains unwanted air.

Boxes became larger, and became status symbols for the wealthy. More unique designs like shells became more popular, as well as the designs that featured new materials such as ivory, tortoiseshell, and mother-of-pearl.

Jewellery boxes are receptacles with the specific function of holding items of jewellery. Such items are also referred to as jewellery caskets.

Jewellery boxes were in common use as early as 5000 BC in Ancient Egypt as the majority of Egyptians, male and female, wore jewellery. It was customary for daughters to inherit jewellery on the death of parents. The Egyptians preferred material was gold, often encrusted with precious gems and as such, a secure, yet often well decorated box or casket was required to keep such items safe.

In Rome, jewellery was a status symbol, with only certain ranks permitted to wear rings for example. Fine brooches were used to secure items of clothing, and again, jewellery boxes were required for storage purpose. 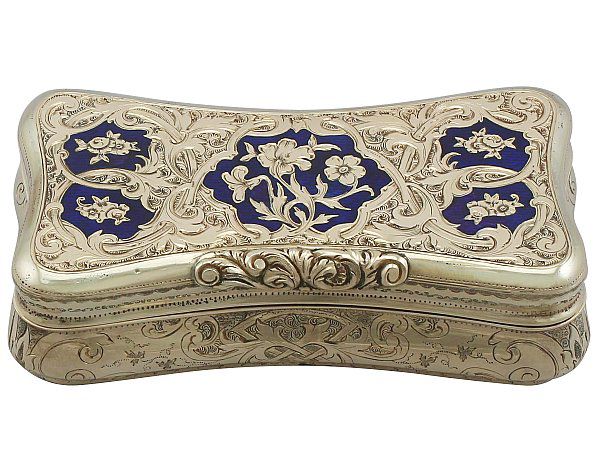 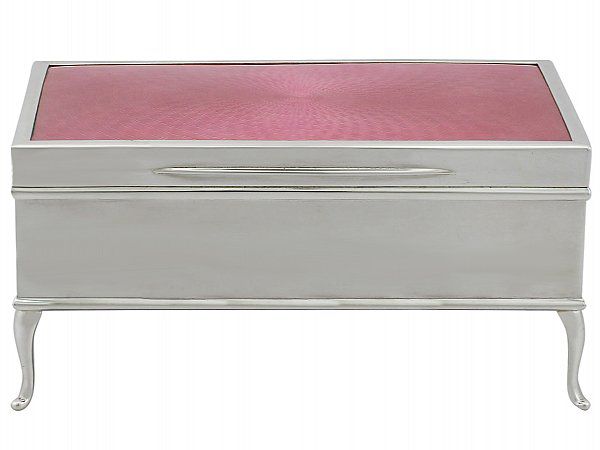 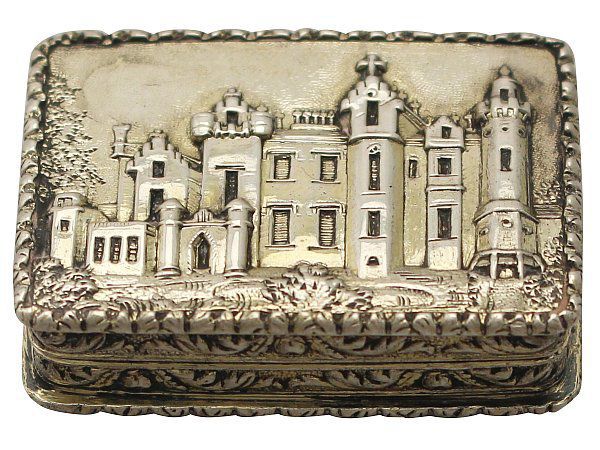 Perfume was first used by the Egyptians as part of their religious rituals with the burning of incense or the application of balms. By the 12th century, the use of perfume spread to Greece, Rome and the Islamic world, and by the 17th century, perfume had an international following. The court of Louis XV was named ‘the perfumed court’, with scents being applied to clothing and furnishings as well as to the skin. By the 18th century a variety of perfume containers were evident, the vinaigrette, a gilded metal box with a pierced, decorated interior grille, was used to hold sponges soaked in scented vinaigres de toilette (aromatic vinegar). The interiors were gilded to prevent the silver from staining. From 1800 – 1850 these boxes were manufactured in vast quantities in various shapes and forms.

Hand rolled cigarettes were sold in the mid 19th century, with a significant increase due to mass production in the early 1900’s. As smoking became more fashionable, a variety of cigarette cases, from plain sterling silver and gold, to enamel decorated cases were produced from the late 1800’s – 1950’s.

Cigars, as reported by Christopher Columbus in the late 1400’s, were smoked by native Indians in Cuba. The first cigars as recognised today, were produced at the beginning of the 18th century. The peak of cigar smoking was in the mid 1800’s.

Cigar boxes had two main forms, a small, rectangular case, made to protect cigars when carried out eh person, and larger boxes, made to hold cigars in a decorative manner on a table or sideboard.

Cigar cases were made either from rigid materials such as silver or gold, or from leather, reinforced with a strip of metal to the interior. Such containers were specifically made to hold two, three, four of five cigars.

Cigar boxes however, were much larger receptacles made of decorated wood or silver. 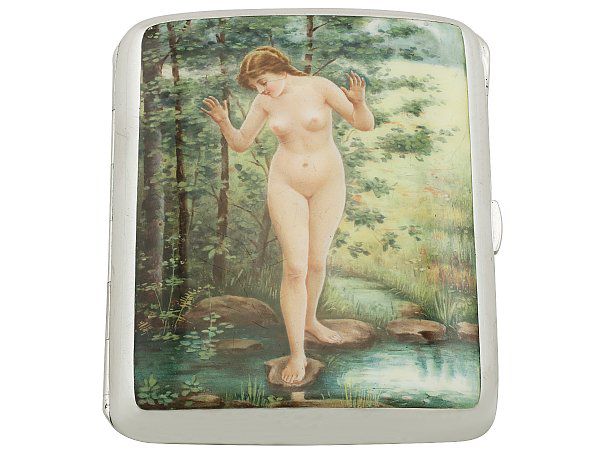 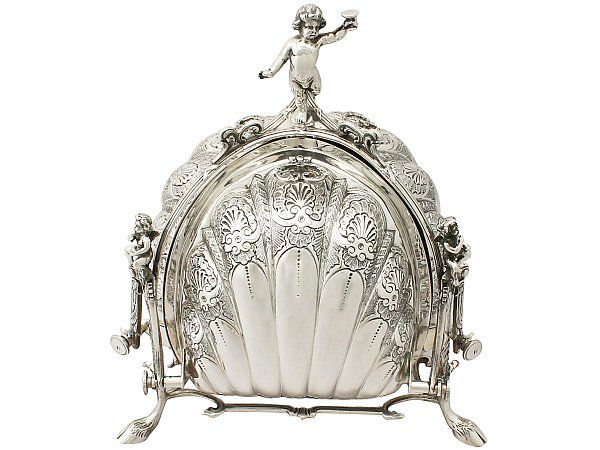 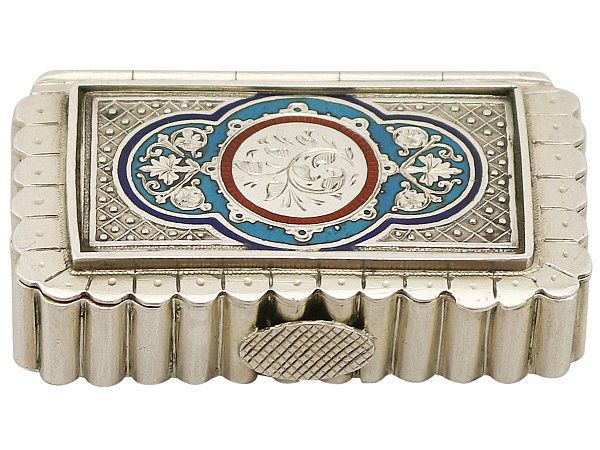 Demand for commercially produced biscuits soared in the 19th century, along with demand for tea and coffee. As biscuits are fragile by nature, a tin, box or barrel provided a modicum of protection, with the additional benefit of being air-tight, keeping biscuits fresher for longer. It is alleged that George Palmer, of Huntley and Palmer’s biscuits, created the biscuit tin in the mid 1800’s to enable his products to be shipped securely around the world. (By 1900, Huntley and Palmer had become Britain’s leading biscuit manufacturer, offering over 400 different types of biscuit).

Biscuit boxes varied in size, shape and materials depending on the desired use. Large tins were used to transport goods, whereas smaller, more decorative boxes and tins were for domestic use.

Vesta was the Roman goddess of hearth and home/light and fire. Vesta cases were named after this goddess because of their connection with light and fire!

Vesta cases were introduced in the early 19th century following the manufacture of friction ‘lucifer’ matches in 1826. These matches could self ignite from the heat of friction, often explosively, and thus were a potential danger if carried loosely in the pocket. Vesta cases were compact gold, silver or silver plated cases just large enough to hold (and keep safe) a good number of matches. Vesta cases also prevented matches from becoming damp and therefore useless.

Although vesta cases were restricted in size because of their function, their decoration varied enormously, from the very plain to the heavily embossed and chased decorated.

The majority of vesta cases have a hinged cover and a ring loop attachment to allow suspension. Many examples have a serrated lower border to allow matches to be struck alight. 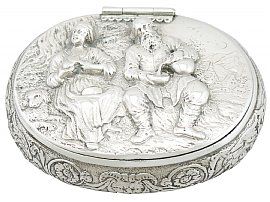 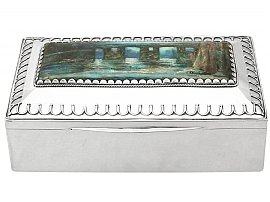 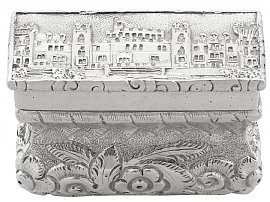 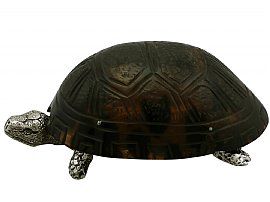 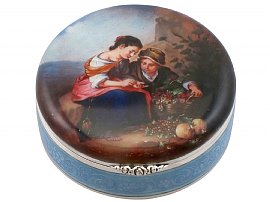