History of the Tea Set

Antique silver tea sets and tea services are full sets of all the pieces necessary to serve tea to guests. They can vary from modest sets, comprising of three key elements - the teapot, the cream/milk jug, and the sugar bowl - to grand sets of nine pieces or more that were created to serve a large group. Tea sets are created to reflect the individual serving the tea. Modern, simplistic silver tea sets reflect refined class, whereas the larger, more ornate sets indicate grandeur and spectacle - designed to be a centrepiece within a grand home as well as a functional service.

Tea sets and services are also a wonderful way to showcase the craftsmanship of a silversmith because they provide a large surface which will be viewed from all angles. Each separate component may feature its own individual design, and then when displayed with the full service, reveal a larger and more intricate motif. Silver is an excellent canvas for engraving, and it was popular during the 1800s to have a family crest, emblem, or simply initials etched into the tea service, to display a family’s heraldry as well as their wealth and status.

Perfect for a gift, tea sets are comprised of smaller elements which, when combined, become a grander and larger display. The elements of the set will always be worth more as a full collection than they will as individual components due to the grand splendour of a completed set.

History of the Tea Set

The earliest recorded use of tea dates back to the Ancient Han Dynasty 206 – 220 BC, when the beverage was brewed by the infusion of hot water in tea leaves, sometimes mixed with crushed spices such as ginger and orange. During this time, tea was consumed from multi-functional bowls.

Since then, tea in this form has remained fairly constant, but traditions and brewing methods have evolved in-keeping with different eras and cultures, resulting in a wide variety of beverages, and consequently a wide range of tea sets. Many examples of tea sets date back to the Ming Dynasty 1368 – 1644 AD, and it wasn’t until much later that smaller, European sets began to be developed.

It was during the 1600s that tea started to become more popular throughout Europe, and the Dutch created a variation called ‘Melkthee’, adding milk. After tea gained this wide spread popularity, the East India Company began to import tea sets made from oriental porcelain from China. Complete sets would be ordered from factories in China or Japan, and then be decorated with family crests upon their arrival in England, a process that could take up to two years. During this period, the French Marquise de Sévigné advocated the use of a creamer, and by the early 1700s, sugar baskets (later to become sugar bowls) were introduced. Tea sets incorporating a teapot, sugar bowl and cream jug (creamer) were not in common use in the Western world until the late 1700s, when the reduction in the price of tea made it more available to the masses. 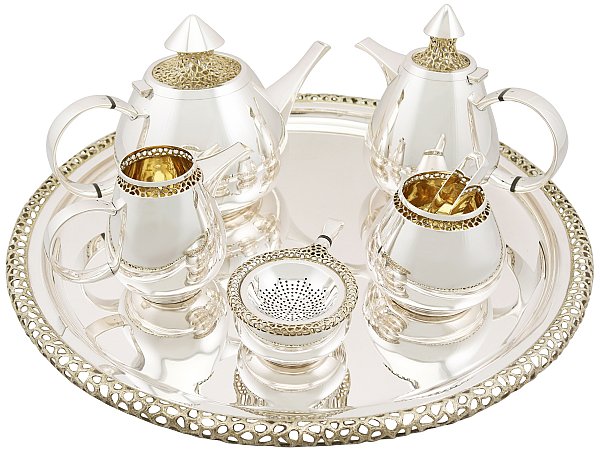 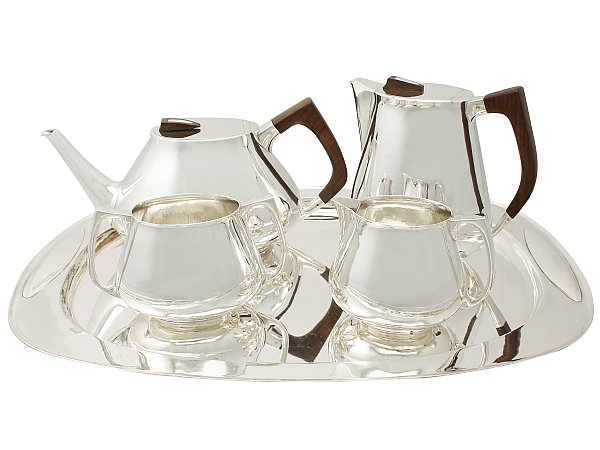 By the end of the 1700s, larger tea sets were becoming more commonplace, sometimes containing up to 43 pieces (12 teacups, 12 saucers, 6, sometimes 12, coffee cups, a teapot with a cover and a stand, a tea canister with a cover, a milk pot with a cover and spoon tray). For those who couldn’t afford such an extravagant set, however, sets would have to be shared between communities. Many families would coordinate with other households to make a complete set and then enjoy a communal tea.

It was during the reign of Queen Victoria 1837 – 1901 that the tea kettle and coffee pot were added to the larger tea services, to coincide with the fashion for taking mid-afternoon tea. The extension of the tea service accommodated this more extravagant experience. A more excessive ritual than midday tea, afternoon tea involved small cakes and was a more of a pleasure-based experience. This attitude meant that the service became grander, to reflect the grandeur of the occasion. There were traditional roles within the serving of afternoon tea. For example, the hostess would sit near the table or stand beside it while pouring the tea, and the role of passing out the teacups would traditionally go to the gentleman of the house, or the daughter if he was not present.

Antique silver tea services retain their value well, and are always in demand. They are still used in many homes as part of an elegant dining experience, particularly when entertaining guests. This means that collectors, enthusiasts, and those simply looking for a wonderful gift are always on the lookout for their perfect set. Whether it may be an ornate set like this five-piece antique French service, or a more simplistic design such as this vintage, art deco set, there is a tea set for each individual’s style. In terms of re-selling, silver teaware is exceptionally resilient to trends, as they are classic pieces that can be enjoyed every day by those who wish to indulge in luxury while taking tea, or for those who simply appreciate the teapot as an ornament and a testament to craftsmanship.

What is a Slop Bowl?

Slop bowls are an often overlooked aspect of a traditional tea set. The name may sound almost vulgar, but the slop bowl was an essential to those wishing to have afternoon tea. 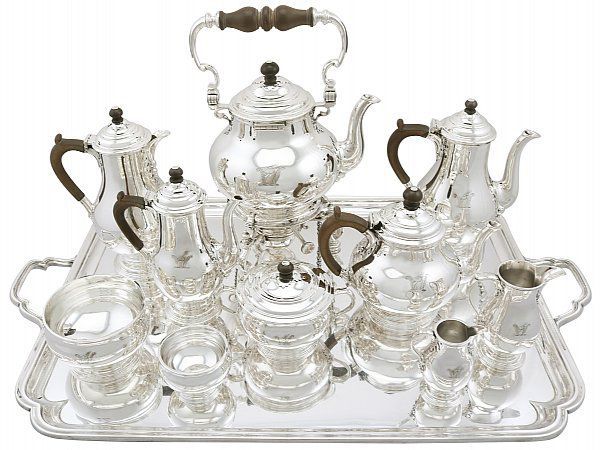 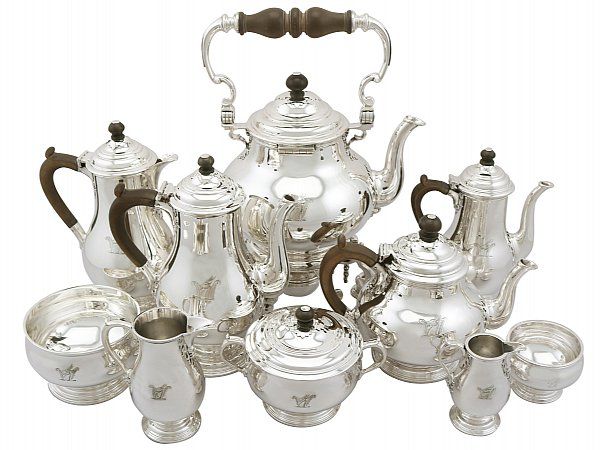 ‘Slop’ is simply a term for the unwanted residue involved in drinking tea, such as tea leaves and cold water. Slop bowls (also known as tea waste bowl) were used to empty the sediments of tea from a teacup before refilling the cup with fresh tea. This would have been a very important part of the process, as – with teabags not being commercially sold in the West until 1904 - tea leaves would have been present in the bottom of the cup.

Slop bowls were also used to store old water that had been used to initially heat the teapot, as well as any old water from cups that had gone cold, so that fresh, hot water could be added. Slop bowls were also incredibly useful if one was hosting a tea tasting session, as the remains of old tea could be emptied out in favour of a new flavour. 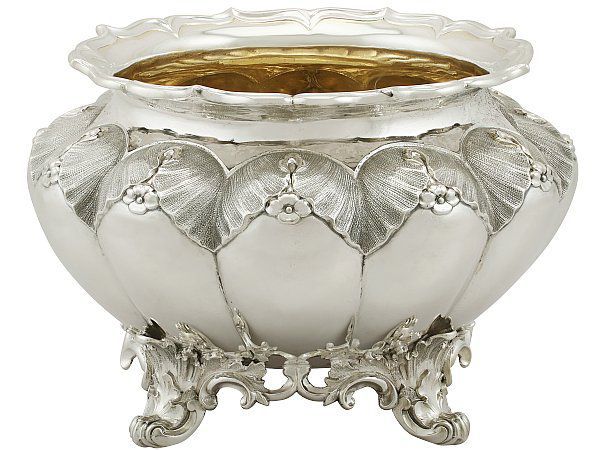 A Small Selection of Items: 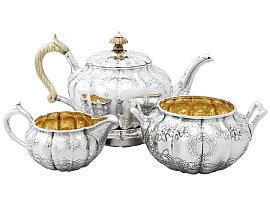